The philosophy that life sometimes unfolds for the better when there’s psychological ambiguity over emotional clarity is explored with a light Freudian touch in this fourth episode of ‘Dekalog’.

Cast: Adrianna Biedrzynska, Janusz Gajos
Plot: A father and daughter, Michal and Anka, have a unique intimacy, which the college-aged Anka is beginning to feel conflicted about. When she finds an unopened letter from her deceased mother, it seems to justify her attraction to Michal, who may not in fact be her father. (from The Criterion Collection)
Awards: Won FIPRESCI Prize & Children and Cinema Award (Venice). Official Selection (Cannes).
Source: Telewizja Polska S.A. 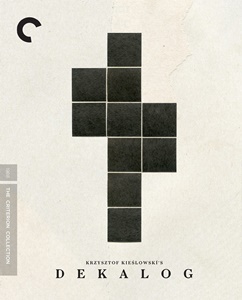 The fourth episode of Dekalog is a tad more interesting than the third, which could be seen as a companion piece. The third explores the troubled relationship between a married man and his ex-lover over the course of the wee hours of Christmas morning. Their problematic past, stagnant present and uncertain future are expressed through conversations of lies and half-truths.

In Dekalog: Four, the past-present-future construct is impressed upon a narrative about a young woman, Anka (Adrianna Biedrzynska), and her father figure, Michal (Janusz Gajos), both of whom have lived together since she was born. I mention ‘father figure’ because throughout the film, Kieslowski remains ambiguous about the identity and legitimacy of the man in question.

Anka is also confused about her feelings for Michal. There’s a light Freudian touch to the proceedings, a kind of Electra complex, but is suppressed into a more urgent plot complication: Anka discovers an unopened envelope written by her deceased mother, only to be read after her death.

Honour thy father and thy mother.

Half-guessing the letter would confirm her suspicions about Michal, Anka is torn between seeking emotional clarity or psychological ambiguity. Kieslowski plays on this and goes into a more philosophical territory: does life unfold for the better if we do not know certain truths? It’s the classic dilemma of fate versus self-agency, of wanting to know how your life would play out, versus charting your own path.

Kieslowski gives us a drama with some indelible scenes. In one, Anka and Michal are in the elevator of their residence (a familiar visual motif of the Dekalog series), and the doctor from Dekalog: Two comes in at their moment of embrace. His appearance seems to suggest a judgment of sorts, having been privy to consequences of private affairs (as we learnt in the second episode)—his is a look of a man who has seen it all before, but could do no more.

“Honour thy father and thy mother” appears to be the commandment that Dekalog: Four tries to interpret. But Kieslowski’s film is not as straightforward as it seems—Anka, as mentioned, is placed in a dilemmatic position: she can’t honour both father and mother at the same time, and that is what makes the narrative interesting.