A rare Ozu masterpiece about being optimistic and moving on with life, shot in rich colour by the famous Kazuo Miyagawa.

Cast: Ganjiro Nakamura, Machiko Kyo, Haruko Sugimura
Plot: The head of a Japanese theatre troupe returns to a small coastal town where he left a son who thinks he is his uncle, and tries to make up for the lost time, but his current mistress grows jealous.
Awards: –
Source: Dalei 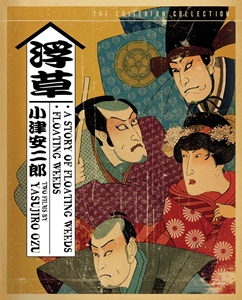 How many masterpieces can Yasujiro Ozu make? Floating Weeds, one of his last few works before his untimely death in 1963, is one of his rare gems that was shot in rich, intoxicating colours by arguably Japan’s greatest cinematographer Kazuo Miyagawa.

Miyagawa previously worked on films as acclaimed as Kurosawa’s Rashomon (1950), and Mizoguchi’s Ugetsu (1953) and Sansho the Bailiff (1954). Here he lends his renowned expertise, creating a beautiful canvas for Ozu’s simple story to unfold in emotionally complex ways.

Floating Weeds is a sort of remake of his 1934 silent film, A Story of Floating Weeds. Set in a seaside town in a sweltering month, a troupe of performers bring their latest act to the townsfolk. While initially successful, they soon lose their novelty and struggle to survive.

“A man who is ungrateful is not a human being at all.”

Ozu does not focus on their art, but the intertwining relationships among the members. Problems start when the old Master visits his ex-girlfriend whom he has an illegitimate son with. His mistress suspects something afoul and devises a sneaky plan out of jealousy.

Ozu, as always a magnificent director of actors, and famously obsessed with framing his actors from head to toe from a low angle to give his painstakingly detailed mise-en-scene a kind of meditative life perspective, delivers sumptuous visuals including one astonishing scene that sees a young couple sitting next to the bow of an old, rusty huge ship in an isolated wharf.

Another memorable sequence that is exquisitely shot sees a heated exchange between the Master and his mistress, who are separated by the fury of pouring rain with a striking red umbrella in the background.

Roger Ebert, who provided the audio commentary on the 2003 Criterion DVD release, names this film as one of his ten all-time favorites.

Floating Weeds can be considered to be a very important Ozu film, and this is despite many of his films achieving some sort of greatness already. It ranks alongside Tokyo Story (1953) as one of his thematically strongest pictures in his oeuvre.

While Tokyo Story, his magnum opus in my opinion, depicts the breakdown of the nuclear family amid urbanization, Floating Weeds inspires us to be optimistic and to move on in life even when things do not work out well. The key takeaway of Ozu’s film is that we must never stay stagnant. For stagnation breeds contempt. And contempt breeds hate. And hate… well you know the rest.