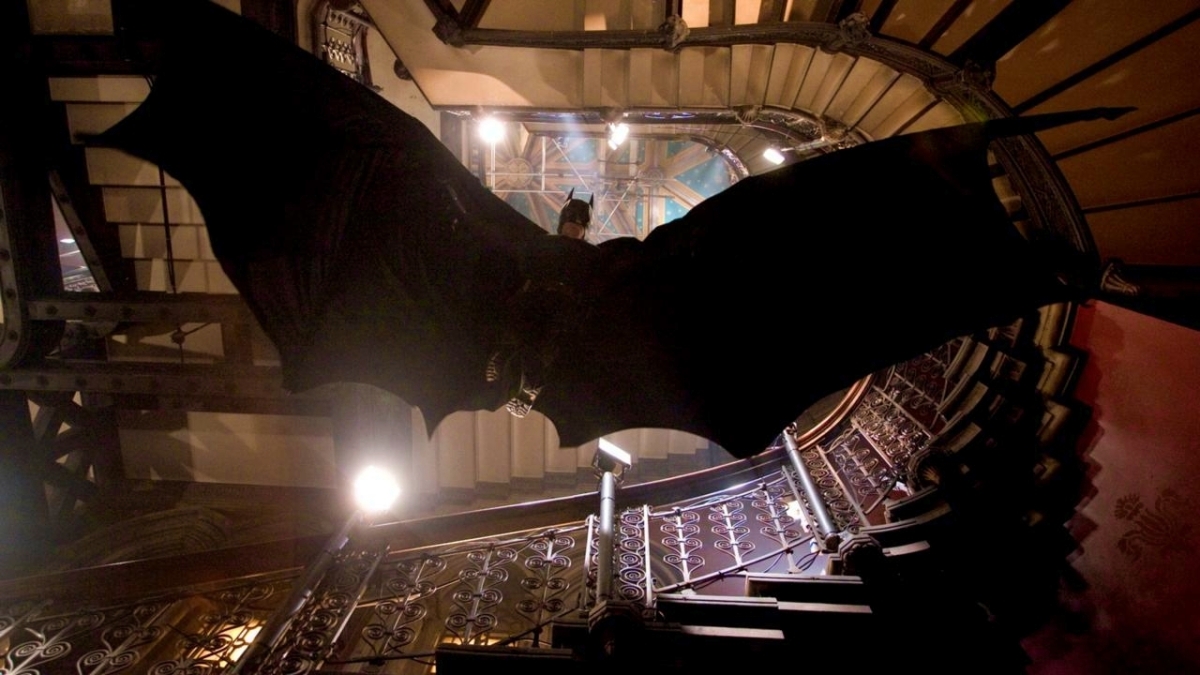 Perhaps the deepest film, philosophically speaking, of the trilogy, as Nolan delivers a compelling entertainer that asks not who but what Batman is.

Looking back at Batman Begins, the first installment of Christopher Nolan’s Batman trilogy, in conjunction with its sequel The Dark Knight (2008), it is clearly evident that Nolan’s vision of the popular comic book hero is nothing less than the sum of the parts that make up a truly well-defined and realistically-developed anti-hero.

In Nolan’s world, Batman is as humanly flawed as Bruce Wayne himself, and the writer-director makes sure that this is communicated to the audience. In one scene, Batman escapes by jumping off a roof in a chase sequence. He lands clumsily and noisily on a retractable ladder that extends itself.

Christian Bale who plays Batman/Bruce delivers a performance that is neither showy nor restrained. Really, it is not about the intensity of the performance but about the motivations behind the actions that define who Batman is. Even so, by the end of Batman Begins, it is still unclear who Batman really is, though this is explored with more depth in the sequel.

This is where Nolan hits that rare, illuminating spot that gives us an anti-hero who is well-developed yet has issues with his own identity. Batman is a symbol of hope for Gotham not by fate but by choice, and even then, Nolan throws that symbol in murky waters.

While The Dark Knight is widely considered to be the epitome of the superhero genre, though I would use the term “superhero” very loosely here, it would be fatal to see Batman Begins as an inferior companion to one of the great crime films of the 2000s.

Batman Begins is in my opinion a deeper film than its sequel because it lays the philosophical foundation for a character whose motivation to act not only lies in guilt and anger, but also in the desire to confront the very fear that incapacitated him not to act.

Batman Begins is a film about memory, like a faded photograph. It plunges head-on into Bruce’s backstory and situates it in the present, providing ample illustration of the transformative character arc that Bruce would go through, and presenting an ambivalent identity he continues to struggle to make sense of in The Dark Knight.

Wally Pfister’s cinematography here is occasionally tinted with golden brown, alluding to that essence of memory. Compare this to the cold and dark bluish tint in the sequel, and it is quite apparent that Batman Begins is a more humanistic and less cynical picture, though it remains considerably dark by genre standards.

This is Nolan’s first foray into big-budget Hollywood filmmaking, and he treats it as serious as an arthouse filmmaker embarking on a personal, independent project. Despite its role as a tentpole film for Warner Brothers, Batman Begins is distinctively a Nolan picture – a solid blend of realist action and smart ideas.

Although conceptually different from Tim Burton’s more imaginative vision of the caped crusader as seen in Batman (1989) and Batman Returns (1992), Nolan dares to challenge fans’ perceptions of how a superhero film should be like.

By focusing on Batman as a human character with an existential issue that is worth investing our emotions in, Nolan has avoided caricaturizing superheroes as masked vigilantes who are comfortable in their own artificial skins.mIn Nolan’s hands, Batman Begins is a masterful action picture that continues to impress with its brawn and wit.

With The Dark Knight Rises slated for release in the summer of 2012, Nolan is under intense pressure to deliver a picture that not only should ideally match The Dark Knight in epic boldness, but should also bring viewers back full circle to the philosophical roots of Batman Begins, and answer the most important question of all: What is Batman?