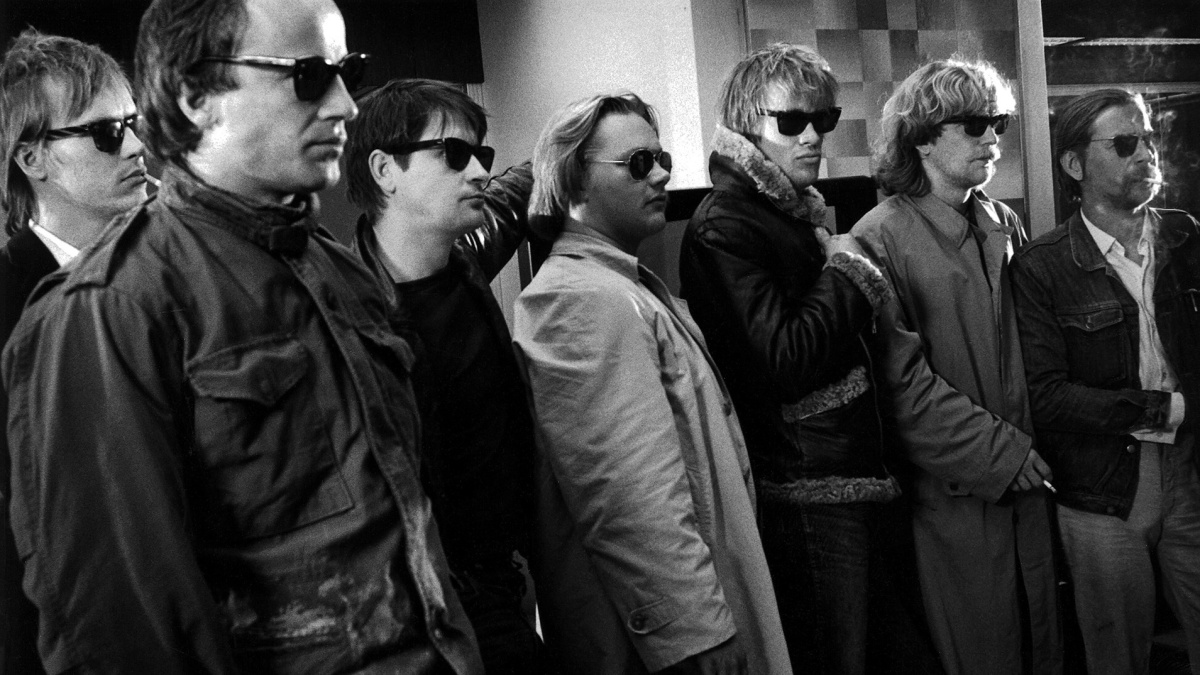 A gang of shades-wearing weirdos attempt to create meaning out of a meaningless existence in this uneven absurdist work of comic nihilism.

(Reviewed at the Finnish Film Festival ’18)

Back when Aki Kaurismäki hadn’t developed into the filmmaker we know and revere today, he made Calamari Union, one of Finnish cinema’s key absurdist works.

Only his second fiction feature at that point in time, Calamari Union was shot in black-and-white, and amongst many other things, became a quaint ‘record’ of Helsinki in the mid-1980s—not least its streets, cafes, and in an early sequence in the film, its metro.

The metro, as you would see, is taken over by a gang of 14 desperate men named Frank who commute to the city center in the dead of night where they then disperse to make their own luck, with some attempting to reach the seaside of Eira in search of utopia.

Kaurismäki charts the characters’ journey—some together, others alone—as they stumble across the city, inadvertently also encountering one another in pubs, cafes and even in cinema halls.

It is a very fragmentary experience seeing Calamari Union, whose narrative is often disjointed and uneven, but it is also fun and ridiculous in its treatment of comic nihilism.

These Frank-weirdos get into situations where nothing positive turns out for them, and in their attempt to create meaning out of a meaningless existence, they sink deeper into futility and insignificance.

“I have organised us transport to the extreme center of the city. After that it’s every man for himself.”

But because the film’s style is meant to be preposterous, Calamari Union while not exactly a great picture on its own terms, somehow finds some semblance of unadulterated cool (this was years before Tarantino defined it for the ‘90s with Reservoir Dogs (1992)), with a measure of rebelliousness as conspicuous as the shades that these weirdos wear.

There is an unforgettable scene of one of the Franks playing the famous song, “Stand by Me”, spontaneously with a band to an empty space. In contrast, there is an earlier scene of a group of Franks belting away a Finnish song to an adoring, excitable crowd—this could be one of the funniest moments of the movie.

Perhaps from these two scenes, one could better make sense of Kaurismäki’s fascination with bands and the performative aspect of music, and how these continually turn up in his later films in different forms and styles.

Calamari Union may not eventually make any logical sense, nor is it always compelling, but it remains to be one of the director’s most distinctive works, and a film that fans of cult world cinema would find interesting.