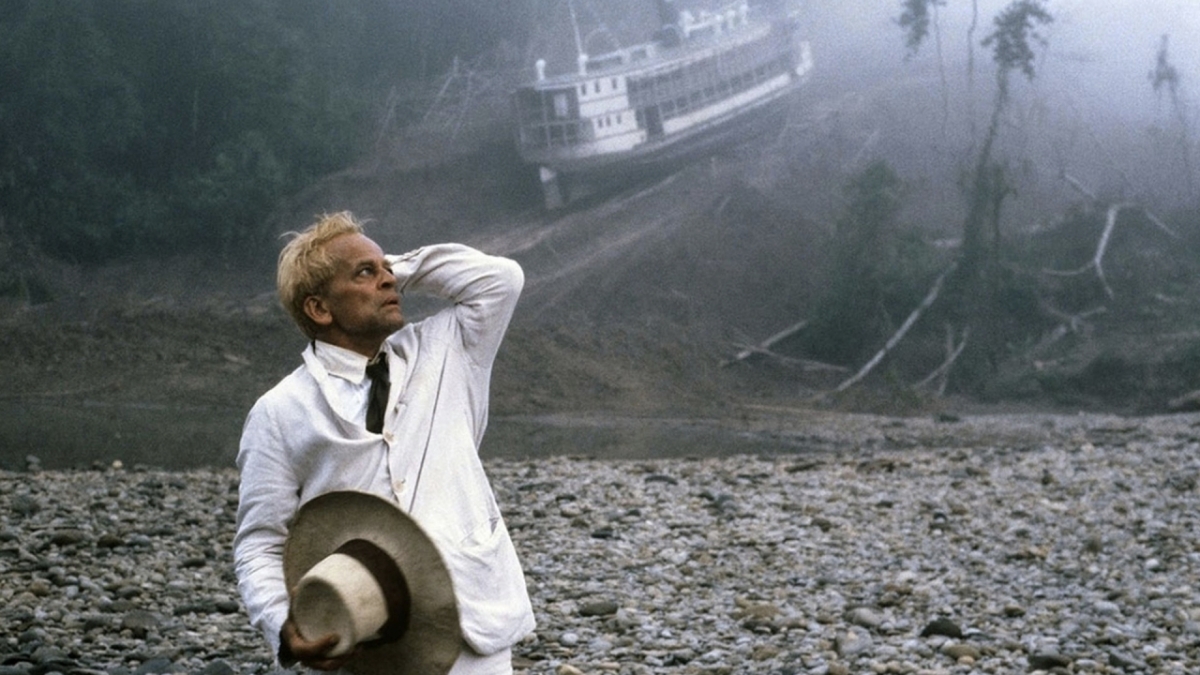 One of the greatest feats by any filmmaker in the history of cinema, Herzog’s film pits personal ambition against the forces of nature as a man desires to build an opera house in the middle of the Amazon jungle.

Cast: Klaus Kinski, Claudia Cardinale, Jose Lewgoy
Plot: Fitzcarraldo wants to build the world’s largest opera house in the middle of the Amazon jungle. But to fund it, the entrepreneur will have to venture deep into the wilderness and the unknown…
Awards: Won Best Director (Cannes); Nom. for Best Foreign Language Film (Golden Globes)
Source: Filmverlag der Autoren

If there was ever a film that captured the madness of one filmmaker and summed up his notorious obsession with translating crazy stories onto the big screen, that film would be Fitzcarraldo, and that director would be Werner Herzog.

Made in 1982, and competed at Cannes, where Herzog was awarded Best Director for this incredible endeavor, Fitzcarraldo tells the tale of one man who dreams of building an opera house in the middle of the jungle. That man is Brian Fitzgerald, played by the enigmatic and screen-stealing Klaus Kinski.

In order to fund his opera house, Fitzgerald buys a steamship so that he could sail upstream along the Amazon river to reach a forested area that has been inaccessible to Man for centuries.  That area contains millions of rubber trees that could be tapped, which could earn him a fortune.

Fitzcarraldo follows Fitzgerald as he journeys deep into the heart of nature, chasing a dream that is just as wild as the environment he has thrust himself in.

He encounters a hundred odd native Indians along the way, piquing their curiosity with his large steamship, and later enlisting their labour to carry out an absolutely crazy plan.

Fitzgerald’s plan is to drag his steamship, all thirty tonnes of it, over a steep hill from one river to another.  Very remarkably, Herzog filmed this entire sequence without the aid of visual effects.

“Fitzcarraldo will build it and Caruso will sing at the premiere. It’s only the dreamers who move mountains.”

As a result, it remains to be one of the most jaw-dropping stretches of cinema, a technical achievement rarely equaled and almost impossible to emulate by anyone whose sanity is still intact.

Herzog’s camera captures this incredible sequence with documentary-like realism; one can hear the rumbling and creaking, and feel the tension in the ropes as they pull the massive man-made beast over difficult terrain.

Another sequence that is every bit just as suspenseful shows the steamship colliding with rocks, as rapids force it to float dangerously fast downstream.  Herzog’s mastery of his environment, in this case, the natural environment, is his strongest attribute.

Despite shooting in a hostile location, facing insurmountable physical challenges, and being notoriously over-demanding on the cast and crew, he manages to complete the film, which is already a feat in itself.

In Fitzcarraldo, Kinski grounds his character in reality with a performance that is much less exaggerated (and powerful) than his starring role in Aguirre, the Wrath of God (1972), but with more subtlety to match his character’s eccentricity.

Filled with absurdist situational humor – one bizarre moment sees Fitzgerald playing Italian opera on his Victrola on top of his floating ship as he tries to drown the sounds of tribal drumming and chanting during the journey upstream, Fitzcarraldo however feels slightly uneven in terms of pacing.

Fitzcarraldo may not be Herzog’s greatest film, but it is arguably his greatest feat as a filmmaker. There is no single non-CGI image as awe-inspiring in ’80s cinema as the dragging of a steamship across steep land.  And to the sounds of Caruso playing on the Victrola.