A respectable effort by Almodovar that balances melodrama with the mystery-thriller.

Cast: Penelope Cruz, Lluís Homar, Blanca Portillo
Plot: Harry Caine, a blind writer, reaches this moment in time when he has to heal his wounds from 14 years back. He was then still known by his real name, Mateo Blanco, and directing his last movie.
Awards: Nom. for Palme d’Or (Cannes). Nom. for Best Foreign Language Feature (Golden Globes).
International Sales: Focus Features 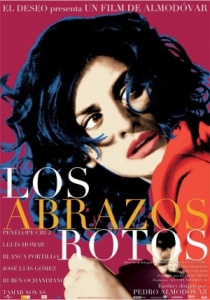 Any new film by the great Pedro Almodovar is always greeted with anticipation. Often regarded as the most talented filmmaker to come out of Spain since Luis Bunuel, Almodovar’s films very rarely perform at the box-office. But his constant collaboration with his muse and Spain’s best known acting export, Penelope Cruz, has resulted in an increase in followers.

In the running for 2009’s Palme d’Or, Broken Embraces tells the fictional story of a blind scriptwriter whose last film, “Girls and Suitcases”, shot and directed by him more than a decade ago, caused him personal and professional tragedy.

I will not go into the details of what happened because Almodovar will skillfully show you how. He reveals bit by bit by splitting the film’s narrative into two timelines – the present and the past.

The ‘present’ narrative strand asks questions and invokes intrigue in part of the viewer while the ‘past’ answers them coherently and logically. This technique engages the viewer to partake in the mystery behind the tragedy of Mateo Blanco, the aforementioned blind filmmaker who now goes by the name Harry Caine.

Cruz plays Lena who lands the lead role in “Girls and Suitcases” after a nervy audition. She attracts Mateo and they have an affair together to the suspicion of her boss (and producer of Mateo’s film) who also has a sexual relationship with her. Lena’s boss sends his homosexual son to spy on them, creating a tense situation both on and off set.

“We kissed? I don’t remember that.”

Almodovar balances this melodrama with elements of a mystery-thriller. In one scene in which a woman is pushed down the stairs by a man, the Spanish director pays homage to Hitchcock by using high and low angle shots that capture the sinister act in a morbidly suspenseful style. There is also a visual reference to Tobe Hooper’s Poltergeist (1982) late in the film that is haunting, but not in a frightening kind of way.

Broken Embraces is not as powerful as Volver (2006), Almodovar’s previous film, but it is also not the disappointment that many critics claimed it to be. It is a decent picture with much to appreciate, one of which is the color tone used. Almodovar’s trademark visual flourishes remain intact; his fetish for rich, bright colors like red and yellow saturate radiantly many of the scenes with Cruz in it.

The final 20 minutes may be long-winded with a film-in-a-film sequence that lasts longer than it should, apparently contributing to the cause. Some would read it as a personal homage to the Almodovar of the 1990s as if the director is questioning the intrinsic nature of film to capture moments of the past forever.

Broken Embraces may not be a milestone in Spanish cinema, but in the oeuvre of Almodovar’s works, it finds itself a quite respectable spot.