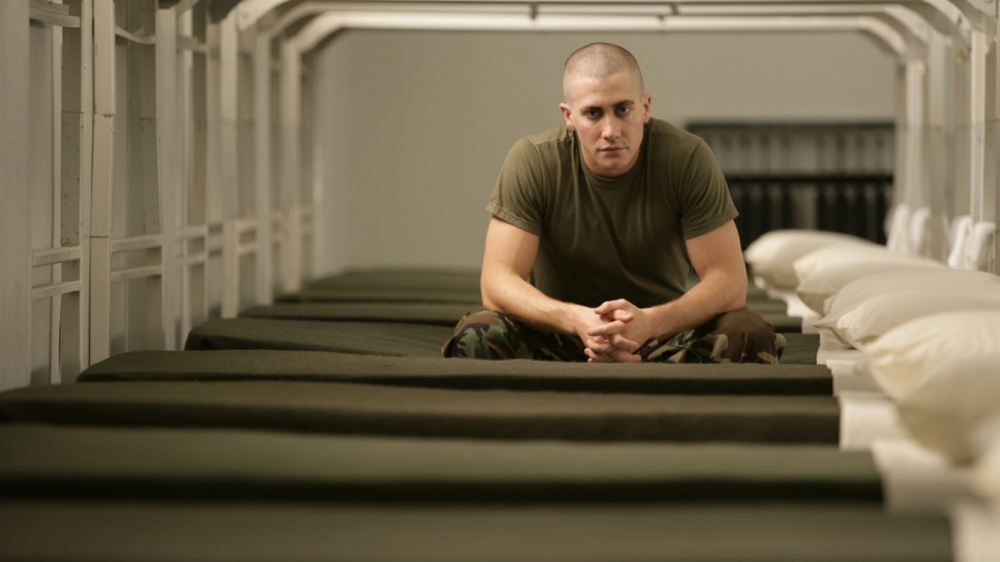 A war movie that is intentionally ‘all talk but no action’—it doesn’t really make us feel for the characters, but we might just grasp the futility of being a cog in the machine.

Cast: Jake Gyllenhaal, Jamie Foxx, Lucas Black, Peter Sarsgaard, Chris Cooper
Plot: A psychological study of Operations Desert Shield and Desert Storm during the Gulf War through the eyes of a U.S marine sniper who struggles to cope with the possibility his girlfriend may be cheating on him back home.
Awards: –
Source: United International Pictures

The respected British theatre director Sam Mendes, whose first feature, the Oscar-winning American Beauty (1999), opened the doors for him to the world of filmmaking, followed up with the decent period drama, Road to Perdition (2002).

His third film, the weakest of the trio, sees him tackle a war movie with less than stellar results.  But one can’t deny that Mendes was working outside his comfort zone, bringing what he knew were genre tropes and attempting to refashion them a different way.

This was a number of years after 1998’s Saving Private Ryan and The Thin Red Line, which paved the way for a resurgence of the war epic.  Jarhead is no epic, and it doesn’t pretend to be so; in fact, it may be more accurate to describe it as a psychological drama about war, though that might give the impression that it has depth.  Well, not quite.

But with a typically strong performance by Jake Gyllenhaal as Swofford, a U.S. Marine, and able support by Jamie Foxx as his foul-mouthed commander, Jarhead is at the very least watchable, and at times, entertaining.

It is based on the memoir of the real-life Swofford, whose stint at the Arabian Peninsula amounted to… well nothing.  Eager for combat action against the Iraqis, Swofford and his compatriots unfortunately had to face months of boredom—and perhaps this was what got Mendes interested in the project.

Intentionally made as a war picture that is ‘all talk but no action’, Jarhead captures not so much the futility of war, but that of being a/an (unused) cog in the (war) machine.

One of the weaknesses of Mendes’ film is that despite the attention-grabbing performances, we aren’t really made to feel for the characters—and this could be a problem with the script and why any psychological depth that the work might have aspired to doesn’t really come to light.

The opening scene is a homage to Full Metal Jacket (1987), while another sees the platoon watching the famous ‘Ride of the Valkyries’ scene from Apocalypse Now (1979)—their reactions are disturbing as they become delirious with joy with every explosion and kill.

But maybe that’s the condition of being a ‘jarhead’, taking pride in being an instrument of death.  But there is a price to pay: empty vessels make the most noise… in the head.