Khoo’s work here is oddly affective, finding the poetic in the mundane as stories of love and solitude come together in elliptical fashion. 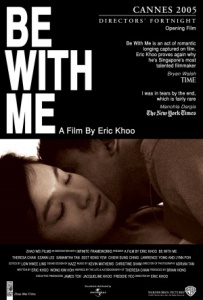 Eric Khoo’s third feature after Mee Pok Man (1995) and 12 Storeys (1997) premiered at the Cannes Film Festival under the Director’s Fortnight sidebar in 2005. It later became Singapore’s submission to the Oscars’ Best Foreign Language Film category for that year, but was unceremoniously disqualified when it was deemed to have contained too much English.

It was also the first Singapore film to feature a romantic fling between two girls. Controversy aside, Be with Me remains to be a high milestone of Khoo’s career and a favourite amongst cineastes here.

Employing a narrative structure which interweaves three separate stories—“Meant to Be”, “Finding Love” and “So in Love”—that are eventually linked to one another, however fortuitously, Be with Me is oddly affective despite taking quite a long time to find some kind of shape and impetus. But when it does, Khoo’s fragmentary work comes together nicely, though not always neatly.

At a time when such filmmakers as Alejandro Gonzalez Inarritu were making this kind of ‘hyperlink cinema’ (see Amores Perros (2000), 21 Grams (2003) and Babel (2006)), Be with Me is in a way Singapore’s version of multilinear filmmaking, and Khoo, knowing the qualities of such a form of storytelling, crafts a sensible work that is intentionally uneven, with emphasis on one segment over the others.

“Be with me, my beloved love, that my smile may not fade.”

There’s a reason why. In the segment “Meant to Be”, which is introduced last but is the one emphasised, the central character is played by Theresa Chan who plays herself as a deaf-and-blind person.

Khoo captures her fortitude and moral strength in a series of vignettes of her cooking, swimming and eating, as well as teaching the deaf and blind. Her story unfolds as an example of the courage to love life despite insurmountable adversity. (She passed away in 2016, with a series of tribute screenings organised.)

The other two segments are foregrounded in the first half of the film, but recede once “Meant to Be” becomes substantially developed. In “Finding Love”, a security guard who can’t stop eating is smitten by a lady at his workplace, but can he ever express his true feelings? Likewise, in “So in Love”, two teenage girls fall in love, but can their relationship last?

Khoo’s film is overall oddly affective, as he finds the poetic in the mundane, exploring love and solitude in elliptical fashion. It might not amount to something truly breathtaking, but Be with Me was a critical step forward for arthouse cinema in my conservative and conventional country.