An uncompromising adaptation of a beloved tale where Imamura manages to find moments of poetry amid the brutality, carnal desires and existential torment.

Cast: Ken Ogata, Sumiko Sakamoto, Tonpei Hidari
Plot: In a poor 19th century rural Japanese village, everyone who reaches the age of 70 has to climb a nearby mountain to die. An old woman is getting close to the cut-off age, and we follow her last days with her family.
Awards: Won Palme d’Or (Cannes)
Source: Toei 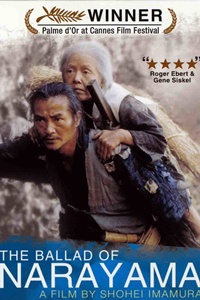 Putting side by side, I must profess that I like Keisuke Kinoshita’s 1958 version more. But they are both remarkable films, each different stylistically and even thematically, even as they share a common source material—the beloved tale of a grandmother who is turning 70, and by the village’s tradition, has to be sent up to the Narayama mountain to die so that there is one less mouth to feed and enough food for her family to thrive.

Shohei Imamura’s 1983 Cannes Palme d’Or-winning The Ballad of Narayama is a powerful and uncompromising work about survival and self-sacrifice, and these themes are made more apparent than in Kinoshita’s version. Deviating from the artificiality of the Kabuki-style that defined the 1958 film, which still has its firm admirers (it is really a masterpiece of lighting, staging and music), Imamura adopts an earthlier, more sensual approach to his work.

While there’s a sense of performative energy to Kinoshita’s ballad, Imamura considers nature a force to be reckoned with. Thus, one could feel a raw, organic quality permeating through his film, which consists of shots of insects and snakes as they survive in the wild that are intercut with human activity like farming… and copulation.

There’s a lot of sex in Imamura’s film—and in an infamous scene, a man has sex with a dog. Another scene sees a couple make love, while in the background, a pair of snakes engages in the same act. Such is the sheer isolation of this village from the outside world that many of the villagers share the same sexual partners. This is also a village that sells baby girls for money, while baby boys are discarded and left to die in the cold—these villagers really need to control their sexual impulses!

In this unforgiving land, Imamura manages to find moments of poetry and beauty that translate into human emotions. Its lengthy denouement is one of the most stirring, nearly wordless, sequences in cinema, matched by a musical rhythm that is almost jazz-like. Amid the brutality, carnal desires and existential torment that plague these people, The Ballad of Narayama strives for transcendence, as if these characters are waiting for deliverance, whatever that may be, but that which never comes.