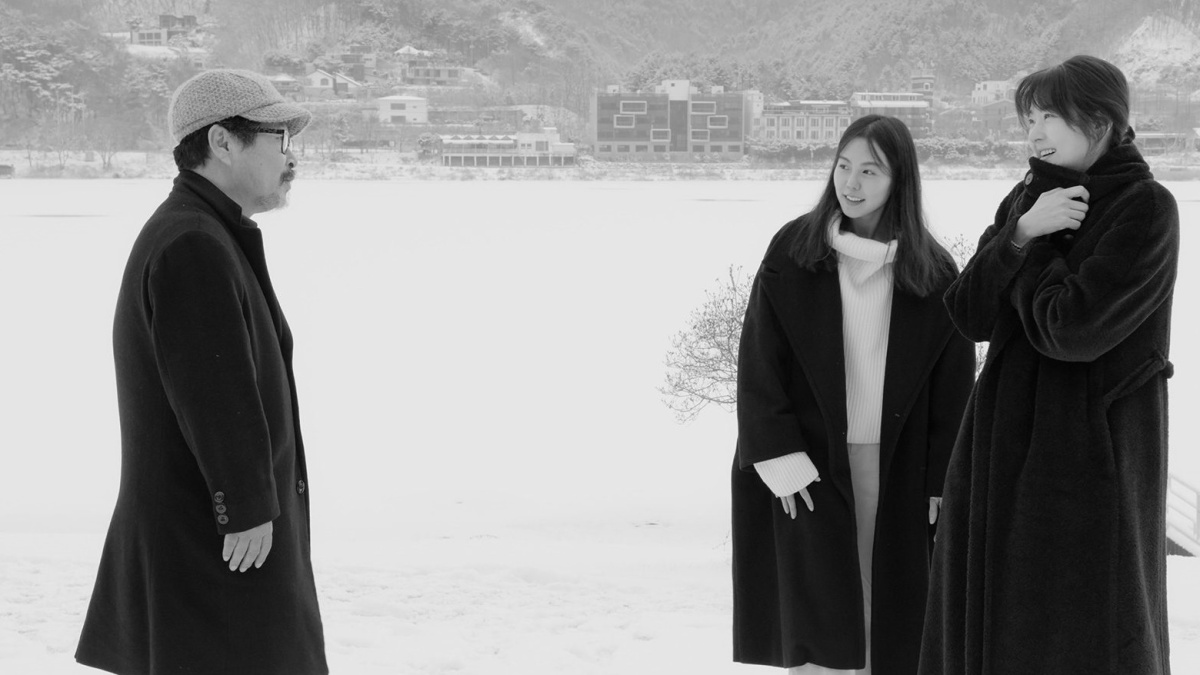 A more melancholic work by Hong than usual, shot in beautiful black-and-white.

Cast: Ki Joo-Bong, Kim Min-hee, Kwon Hae-hyo, Song Seon-mi, Yoo Joon-Sang
Plot: It is the dead of winter and a poet invites his sons to join him at a hotel for a reunion. The hotel also hosts a newly single woman who has a friend keep her company and with whom she shares a room, strolls and conversations. The poet is drawn to the beautiful girls and cannot resist the temptation to discover more.
Awards: Won Best Actor (Locarno)
International Sales: Finecut

There’s a certain charming quality to Hong Sang-soo’s latest, Hotel by the River, although ‘wistful’ might be a more apt descriptor for this beautifully-shot film in black-and-white.

A winner of Best Actor for Ki Joon-Bong (only his second film role) at Locarno, Hotel by the River sees him play an old father of two adult sons who visit him at the hotel that he is temporarily residing.

He’s a well-known poet, but lives alone and away from his estranged children who are worried about his mental state.  This trio of men form one group of characters.

The other group, unrelated to the men, features two ladies, one visiting the other in the same hotel.  Kim Min-hee returns to play a woman who just got away from a seemingly destructive romantic relationship.

Her friend arrives to comfort her.  Hong develops these two groups of characters separately with conversations over coffee (for the men) and in bed (for the women).

In an early scene, Ki’s character glances out of the window and sees the two ladies in the distance amid the snowy weather.  Struck by the beauty of the image of the duo against the natural setting, he goes to make conversation with them.

Their meeting is an awkward one but hilarious.  I mention this scene because Hong introduces to us a third group here, a dynamic which will become significant in the final act.

It is also quite remarkable that despite setting up the film as two main groups with their own problems and lives to be figured out, and hinting that they might meet as a quintet, Hong doesn’t let that play out.

Instead, that pivotal third group becomes the narrative’s ‘leverage’, capturing the ephemeral nature of life—fleeting acquaintances, the poeticising of existential joys and regrets, and the simple enjoyment of one’s company with strangers.

Hong’s sense of humour is still intact, but make no mistake, Hotel by the River is at heart a melancholic piece, more in line with something like On the Beach at Night Alone (2017) than Claire’s Camera (2017), at least in the context of his recent work.

Perhaps one could see it best as an elegy of/for having lived, and with strong performances, plus a waltz-like music motif that recurs at strategic points, this is another welcome effort by arguably South Korea’s most prolific filmmaker.