Backed by a terrific performance by Cannes Best Actress winner Maggie Cheung, Assayas explores the theme of redemption through the inner workings of head and heart.

Cast: Maggie Cheung, Nick Nolte, Béatrice Dalle
Plot: After her husband’s death from heroin overdose, Emily is imprisoned for drug possession. When she gets out, she vows to stay clean from drugs in order to earn the moral right from her father-in-law to take care of her son.
Awards: Won Best Actress and Technical Grand Prize (Cannes)
International Sales: The Works 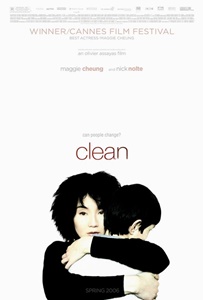 After the critical misfire that was Demonlover (2002), Olivier Assayas followed up with Clean, which was a redemption of sorts for the filmmaker, who teamed up with his ex-wife Maggie Cheung in a role that won her the Cannes Best Actress award.

In what has since been known as Assayas’ ‘International Trilogy’, together with Demonlover and Boarding Gate (2007), Clean traverses between America and Europe in a tale of a woman, Emily (Cheung), who is addicted to drugs. Her husband is a rock musician, who accidentally dies of a heroin overdose (a plot point that kickstarts the entire film). They have a child, a boy who is being cared for by Emily’s in-laws.

The notion of redemption seeps into the main narrative as Emily, torn by the loss of her husband, and her drug addiction deeming her unsuitable to care for her child, tries to turn over a new leaf. She moves from the States to Paris to find a new job and to rediscover her true self, in hopes of convincing her father-in-law—and the law—that she is capable of raising her kid.

Maggie Cheung and Olivier Assayas were already divorced when they made this movie.

Assayas coaxes out of Cheung a terrific performance, arguably one of her best, not just in the hand-to-glove portrayal of her character, but also her multilingual (she speaks English, French and Cantonese in the film) and singing talents.

Clean may touch on matters related to drug use, but it is not necessarily a film that is didactic towards its consequences. It is not really an anti-drug film (in a way that, say, Aronofsky’s Requiem for a Dream (2000) is), but a picture about the importance of desiring to be a better version of oneself—something that would connect to everyone.

Assayas cares more about how adaptable Emily is as a character, in particular her self-agency to remodel herself into a good mother, as opposed to simply taking the route of sympathy, or worse, pity, for her. Clean connects with both the head and heart in that it asks of us to think and feel the implications of problematic family dynamics.

A scene sees Emily meeting her father-in-law at a café at a train station, hoping to see her son—capturing not just the delicateness of family issues, but a range of emotions from frustration to compassion, so perfectly performed by Cheung, and supporting actor Nick Nolte. I think it’s safe to say that Clean is one of Assayas’ better films of the 2000s.