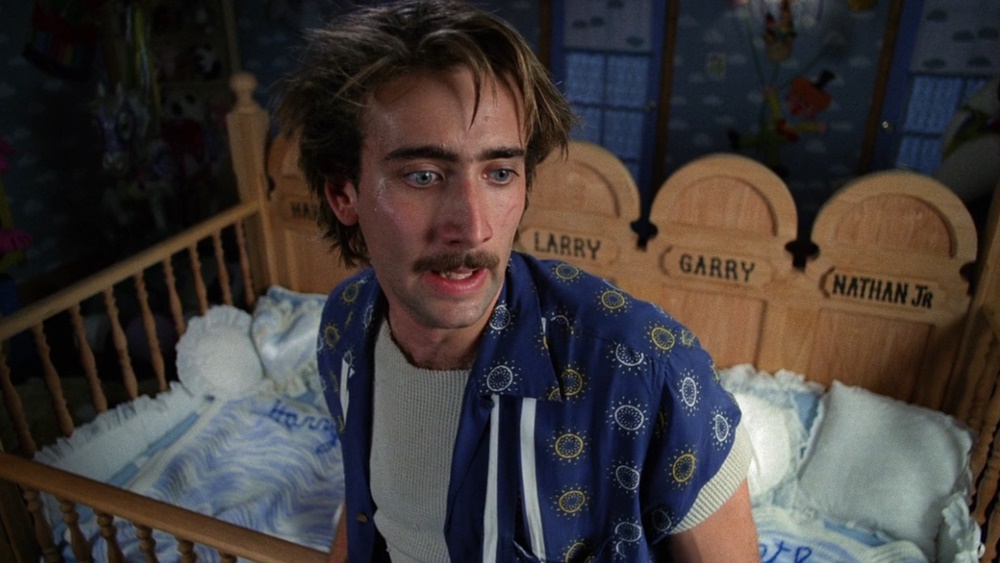 The Coens show their versatility early on in their career in this quirky take on farcical comedy.

Cast: Nicolas Cage, Holly Hunter, Trey Wilson, John Goodman, Frances McDormand
Plot: When a childless couple of an ex-con and an ex-cop decide to help themselves to one of another family’s quintuplets, their lives get more complicated than they anticipated.
Awards: –
Source: 20th Century Fox (Park Circus)

Even though being only Joel and Ethan Coen’s second motion picture after their stunning debut for the crime-thriller Blood Simple (1984), Raising Arizona gave fans of cinema a glimpse of their versatility and unpredictability in writing that would become hallmarks of the ‘Coens style’.

There are few filmmakers in the world today that can alternate between genres with ease. After the comedy farce that is Raising Arizona, they made films ranging from psychological dramas like Barton Fink (1991) to black comedies like The Big Lebowski (1998) to noirs such as The Man Who Wasn’t There (2001).

Raising Arizona is a distinctive and quirky take on farcical comedy. It stars Nicholas Cage as a hapless, reformed convict, Hi, and Holly Hunter who gives up her job as a photographer for the local police department to be his wife.

Now comes the problem: Hi’s wife cannot conceive, and worse, no adoption agency is willing to grant their wish for a child because of Hi’s criminal past, despite their argument that the marriage of an ex-convict and an ex-cop kind of neutralize things out.

“You mean you busted out of jail.”
“No, ma’am. We released ourselves on our own recognizance.”

Their solution? Let’s steal a baby from that couple who are lucky (or unlucky) enough to have quintuplets. Quite indifferently, the film’s title only appears after the 10-minute mark to the sounds of a curiously joyful score by the underrated composer Carter Burwell.

As Raising Arizona continues on, viewers will get to meet some of the most amusingly dimwitted characters that the Coens have ever written – the hyperactive lunatics Gale and Evelle, and a lone-rider-of-the-apocalypse-wannabe who shows a remarkable disdain towards all things living. These characters add quality comic value to the film which happens to have high rewatchability.

Raising Arizona has two well-crafted hilarious action sequences. One happens in the middle of the film when Hi tries to evade the cops after a slow and muddled robbery attempt. The other occurs at the climax involving a chase-and-struggle between Hi and the lone rider which ends unexpectedly and spectacularly.

The Coens have drawn some influences from films like the Mad Max and Evil Dead series, Spielberg’s Sugarland Express, and Arthur Penn’s Bonnie and Clyde.

Fundamentally a road movie, Raising Arizona is also a free-spirited trek into the lives of people whose flirtation with crime signals an end to the liberal 1980s. Yet their nonchalance and self-declared autonomy represent a prelude to the incessant violence and media exploitation of the 1990s.