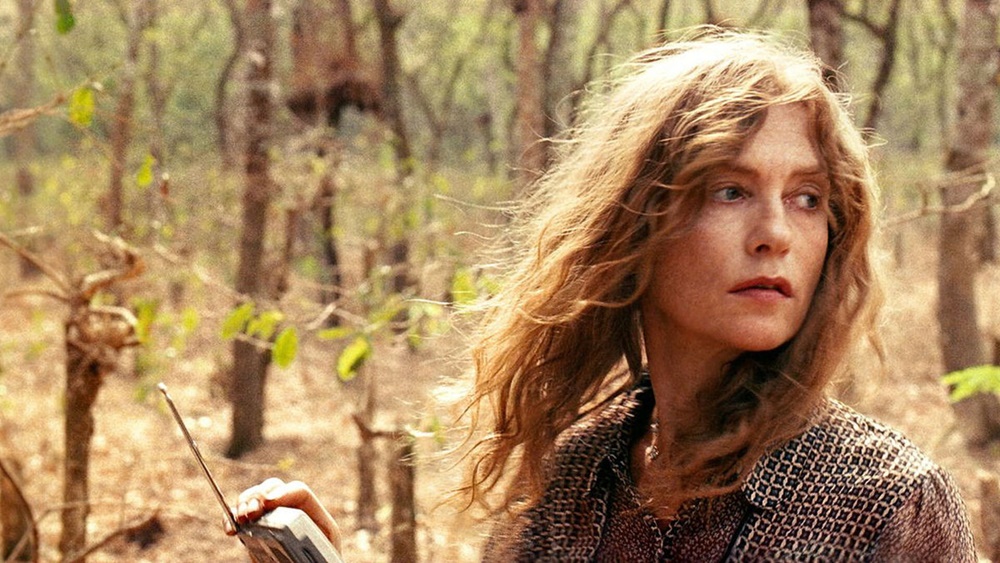 Sporadically engaging, this poetic if bleak drama sees director Claire Denis returning to Africa to shine the spotlight on racial strife and civil war once again.

Claire Denis has made some fascinating pictures, or so I read, but haven’t got the chance to see. White Material, one of her more recent works, came to me by virtue of a very good friend.

It looks pristine on Criterion Blu-ray, and if anything, I think it is a good introduction to anyone, including myself, to the style and themes that have continued to preoccupy the French director since her earlier critically-lauded films like Chocolat (1988) and Beau Travail (1999).

Starring Isabelle Huppert in an excellent individual performance as Maria Vial, a woman managing her family’s coffee plantation somewhere in turbulent Africa, White Material brings us to Cameroon (where it was shot) as we see a naturally beautiful place inevitably turning into a space for civil war and racial strife.

Maria is caught up in the conflict, but being delusional as she is, she wants to continue to hire the locals to help produce more coffee. As the violence draws closer, she tries to connect with her estranged son. Here is a woman claiming authority on grounds of white superiority, and to some extent, of cultural and political defiance.

This film came about because Isabelle Huppert approached Claire Denis, asking her if they could work together.

Huppert does some remarkable work with her character, who refuses to come to terms, or simply hasn’t the capacity to accept the bleak reality unfolding around her.

Her acting is riveting, but the film is only sporadically engaging. I can’t give a clear reason why, but perhaps the film’s structure is more free-flowing, with flashbacks and flash-forwards dictating how the narrative plays out.

In a sense, the looseness of plotting and Denis’ focus on character rather than story give the film a more laconic edge. The visuals are unique though, a mix of realism and poeticism. Maria, in her white dress (no less a reminder of her skin colour), wanders about like a bride of entitlement.

She gets lost, finds herself lonely (and ironically estranged from her white family), but the land that she is on offers no sympathy – well, neither do its people.

She sees the locals as commodity to be exploited for little cost, but the community regards her and her possessions as “white material” – though I’m sure they mean white trash.

Denis’ work may not always have its audience in mind, but at least we can appreciate that she is in her element here in White Material.