A sprawling and inconsistently-paced effort with multiple stories and unrelated characters whose sum is lesser than its parts. 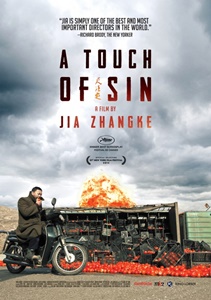 Jia Zhangke is arguably the most important Mainland Chinese filmmaker working for the last decade. His latest, A Touch of Sin, a clever play on the title of King Hu’s iconic A Touch of Zen (1971), is a bewildering picture. It is also too lengthy for its own good, with four main stories driving the narrative, if there is even one.

With the exception of the first story about a man who holds a fiery grudge against his rich, ‘corrupted’ superiors, the rest are inconsistently paced and rather shallowly fleshed out. We are less empathetic to these characters because not enough time is given for us to do so.

All of the main characters of their respective stories commit sin in various forms, often of a violent nature. People are brutally killed, some more deservingly so than others. But A Touch of Sin is not about violence, but turning points in life – the point when someone becomes violent.

Jia is interested in the social conditions that compel people to kill, and despite all the bloodshed, the film is chillingly close to reality. Look at the past news articles on this subject, and you will find many examples occurring in China in recent years.

China, a blooming country that has enjoyed prosperity, but not necessarily sociopolitical stability, is depicted in a myriad of ways – stunning cinematography that portrays the harsh beauty of the lands and the smog-filled cities; its victimized people who take drastic action; and its tradition of opera that reveals the tragedy of all who exist.

It is an ambitious and sprawling picture that covers a lot of ground (literally), exploring themes of corruption, capitalism, materialism, unemployment, discrimination, gender assault, infidelity, and many more. It is a grand movie, and it announces itself in a spectacular way with a violent prologue.

As I mentioned, A Touch of Sin is bewildering, perhaps because there is no clear focus. By the end, you may find the sum lesser than its parts. That doesn’t mean it is not a good movie; it just doesn’t quite meet expectations for a picture that won Best Screenplay at Cannes.

Jia remains a fine filmmaker, and his unique documentary style (he likes to shoot buildings or landscapes in an environment of change or in a state of time flux) continues to be evident even in this narrative feature. Even if I didn’t enjoy it as much as I thought I would, I suggest you should watch it because one doesn’t just simply miss a film by Jia.