It may be an imperfect re-envisioning of the best-selling novel, but Fincher shows why he is one of the most technically-gifted filmmakers of his generation. 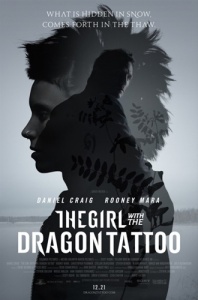 It is difficult to review David Fincher’s The Girl with the Dragon Tattoo without a comparison to its Swedish screen adaptation by Niels Arden Oplev in 2010.

Contrary to popular belief, Fincher’s film is not a Hollywood remake of an acclaimed foreign language feature. Rather, it is an auteur’s re-imagination of author Stieg Larsson’s bestselling novel.

The dark and disturbing material of Larsson’s book is a match made in heaven for Fincher, who has directed his fair share of similarly-themed films in Se7en (1995) and Zodiac (2007). In other words, you won’t find a more perfect filmmaker to helm Dragon Tattoo than Fincher.

This is the plot in two sentences: Mikael Blomkvist (Daniel Craig) is a journalist who is tasked by Henrik Vanger (Christopher Plummer) to solve the mystery of a death in the family that happened many decades ago.

Lisbeth Salander (Rooney Mara) is a young computer hacker who helps him with the task. Things get deadly as they race against time to put an end to the uncertainty. Now, that’s just the gist of it.

For those unfamiliar with the book and Oplev’s film, you are in for a treat because this is one of the most layered of all screen mysteries in recent years, and it is tough not to be engaged by it.

“I want you to help me catch a killer of women.”

The most striking aspect of Fincher’s film that sets it apart from its screen counterpart is its handling of mood and tone. A technical masterclass, Dragon Tattoo features bleak cinematography that chills you to the bone as shots of the cold, wintry setting give a strong sense of isolation.

The camera is also used brilliantly to create unsettling moments that increase in frequency as the film plays on. Trent Reznor and Atticus Ross’ second musical collaboration with Fincher after The Social Network (2010) is also more atmospheric, and at times, menacing, providing a unique metallic sound to the dark imagery.

In terms of performances, Craig and Mara give adequate displays, but they are nowhere as potent as Michael Nyqvist and Noomi Rapace’s world-weary interpretations of their characters in the Swedish film. There is a feeling that Craig and Mara are too comfortable with each other’s character, hence the rawness of their interactions is sorely lacking.

Both films however share a common trait though: a lackluster and draggy ending that peters off into the end credits. I expected Fincher to give us a more urgently-paced epilogue that makes use of the screen momentum generated from the first two hours or so; after all, he managed to make a movie about Facebook engaging even till the very end.

“Hold still. I’ve never done this before, and there will be blood.”

Despite its flaws, Dragon Tattoo is an excellent take on the theme of isolation – both geographical and character-wise. But what emerges from the hellish amalgam of masochistic and anti-Semite elements is Lisbeth’s confident, assured character.

An anti-heroine of sorts, Mara’s Lisbeth is not just the face of a new breed of young, empowered women gracing our cinema screens (think Hailee Steinfield in True Grit (2010), or Jennifer Lawrence in the upcoming The Hunger Games (2012)), but is perhaps the most strangely attractive of the lot. Yes, it really is the Goth makeup.