As beautiful and poetic a first feature can be, this heartwarming Chinese drama centering on Uighur kids in the Xinjiang region is eye-opening.

Cast: Isa Yasan, Kalbinur Rahmati, Alinaz Rahmati, Musa Yasan
Plot: Deep in northwestern China lies the Uighur village that Isa calls home. When he is not at school or working on his parents’ farmyard, he spends carefree days with his friends – until the outside world starts forcing him to say one goodbye after another.
Awards: Won Crystal Bear – Generation Kplus Best Film (Berlin)
International Sales: Flash Forward Entertainment 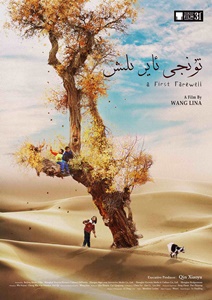 The title is a misnomer—this is not a sad film although some moments may well your eyes up.  Instead, A First Farewell is a poetic and heartwarming work about beautiful people living in a beautiful place they call home.

From the opening static long take of a farmer leading a herd of sheep along a dirt track (a shot which won’t look out of place in Kiarostami’s 24 Frames (2017)), we are immediately transported to a place where time is slow, kids play with little lambs, and a millennia-old tree stands solitarily.

In fact, in a later part of the film, this particular tree—as director Lina Wang emphasises in a close-up that zooms out into a majestic wide shot—becomes a refuge for three kids as they sit on its branches musing about life.  This is my favourite moment of the film, capturing the innocence of youth and setting it against the natural environment where they would lead most of their lives.

We are deep in the Xinjiang region of China, as Wang centers on these Uighur kids as they go about their daily lives—playing, studying and helping their parents collect wool and corn.  Education is a key theme in Wang’s film, as we follow some of them, particularly a lively young girl named Kalbinur, to their local school.

They need to learn Mandarin because it is a state policy (a kind of cultural indoctrination if you will), but in truth, it is necessary to safeguard their future economic prospects as employable Chinese citizens.

Some of the film’s most resonating scenes are that of Kalbinur trying to recite Chinese characters—they remind me of my younger self struggling with Mandarin in school, but more interestingly, these scenes feel encouraging if also quaint, revealing much work to be done to school minorities in the language of the majority.

A First Farewell is a very composed first feature, winning the Crystal Bear under the Generation KPlus category of the Berlin International Film Festival.  It features breathtaking cinematography and ethnic music, and should do well to open the eyes of audiences to a different flavour of Chinese cinema.