Lubitsch and Garbo combine to decent effect in this sharp and witty Hollywood classic about the battle of ideologies and how love gets in the way. 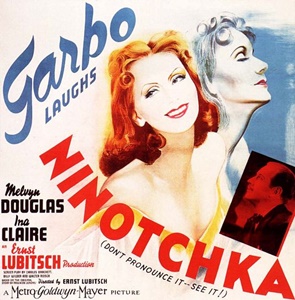 Lo and behold, this is the first Ernst Lubitsch and Greta Garbo picture I’ve ever seen.  Having heard so much about Lubitsch, I think Ninotchka is not a bad introduction, though I suspect he has done more accomplished work in his career.

That being said, Ninotchka is a fine film, banking on Garbo (and her star power) as well as a cast of able actors including Melvyn Douglas to perform a sharp and witty script that was co-written by the legendary Billy Wilder.

Ninotchka, as played by Garbo, has been sent from the Soviet Union to Paris to iron out a diplomatic issue that is threatening to spiral out of control, one involving the rightful custody of a collection of rare gems, allegedly owned by a Grand Duchess… or is it the Soviet Union?

“Do you like me just a little bit?”
“Your general appearance is not distasteful.”

While gems drive the basic plotting, it is the burgeoning romance between Ninotchka and Douglas’ Count Leon that brings the story to dramatic heights—quite literally at one point they are on top of the Eiffel Tower, which was, of course, shot in Hollywood’s MGM studio).

At this point, one must appreciate Lubitsch’s painstaking build-up of ideological tension for the romantic chemistry to flourish.  Ninotchka is a staunch Communist, believing in the political ideas of her country.

Presenting herself as strong-headed and dismissive of emotional manipulation tactics (including Count Leon’s early flirtations with her), Ninotchka eventually finds herself caving in to the Count’s more liberal values, but not without also defending her own.

The movie was banned in the Soviet Union and its satellite states.

Lubitsch’s light touch keeps it all palatable, where ideologies become a playground for the witty, and so is the telling of jokes, such as the scene where Count Leon tries to get Ninotchka to laugh in a café.  Because much of the film centers on these two leads, the political stakes become less important as the movie goes on, though that cannot be said of the emotional stakes at play.

While certainly not as dramatic and impactful as the events that unfold in, say for instance, a film like 1942’s Casablanca (which similarly mixes politics with romance), Ninotchka is still a decent Classical Hollywood title about how love always gets in the way of even the most rigid of ideals.