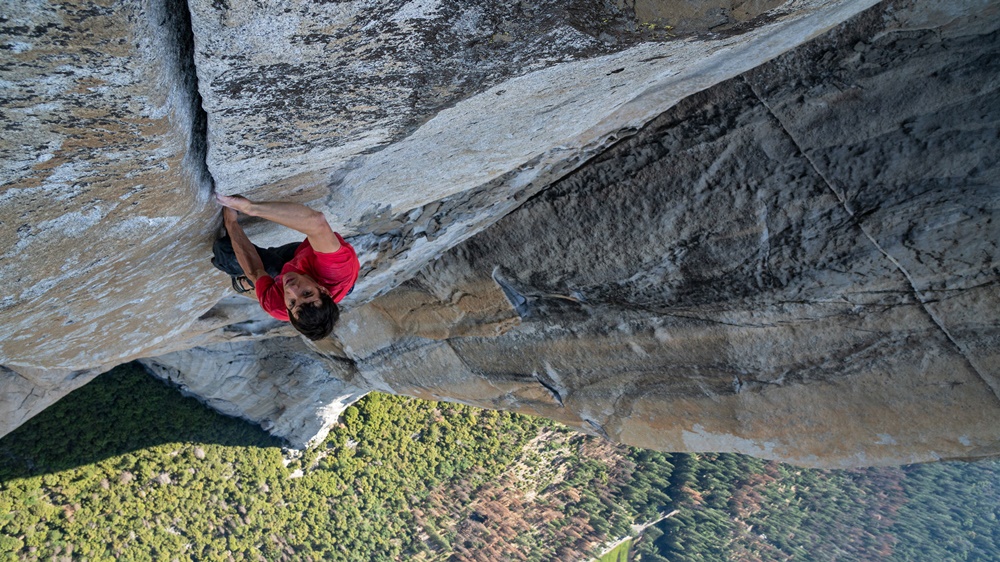 An excellent documentary on world-renowned rock climber Alex Honnold, detailing what could be the most mind-blowing feat in modern human history—his ambition and determination to climb a 300-storey high natural rock wall… with no safety rope.

You might have to reach for that metaphoric bag of powder to get a good grip of/for yourself.  Even in the comfort of a cool, darkened theatre, you will almost certainly get sweaty palms watching one of 2018’s most acclaimed documentaries.

With an Oscar nomination for Best Documentary Feature under its belt (it could even snag a win), Free Solo should travel wide around the world.  That’s not to say it has great commercial appeal, but it is almost certain to pique anyone’s interest, even if you have zero interest in rock climbing.

You see… there’s this guy named Alex Honnold, one of rock climbing’s most famous personalities, who in June 2017, ascended up El Capitan (a 300-storey high natural rock wall that is regarded as the ‘Olympics level’ of the sport)… without any safety rope.  This form of extreme climbing is called free solo.

“Let’s hope for a low-gravity day.”

Most rock climbers climb with a buddy with an assortment of tools and ropes to build safety hooks in the wall to safeguard their ascent; the more adventurous ones do it alone with the same tools and ropes.  In this context, free solo is no doubt a leap of faith for anyone with the slightest imagination of the incredible risks involved.

Honnold’s free solo up the El Capitan could be the most mind-blowing feat in modern human history.  And he did it in under four hours.  (Some context: experienced climbers with safety ropes in the past had taken more than a day).

It’s impossible to comprehend what Honnold had achieved here, particularly his ambition and determination to ‘actually do it’, and his mental state before and during the ascent.

In this new documentary by power couple Elizabeth Chai Vasarhelyi and Jimmy Chin (whose previous work was the Sundance-winning Meru (2015)), we now have a better glimpse of what goes on in the mind of this wholly inspiring man who approaches free solo not as an adrenaline junkie, but as a well-researched endeavour to achieve perfection by being extremely well-prepared, mitigating all possible risks and shutting out the emotion of fear.

Alex Honnold has done the triple crown of climbing in Yosemite. El Capitan, Half Dome and Mt. Watkins.

Free Solo is also an excellent documentary about the ethics of documentary filmmaking, in which Chin and his crew in particular sought to rationalise—that whether they should even be filming such a feat.

What if Honnold isn’t successful?  (In fact, he slipped at hair-raising parts of the climb while practising with a rope.)  What if the presence of the camera suddenly alters his mental state during the climb?

There are so many ‘what ifs’, and as much as Free Solo is about one man’s unbelievable and unforgettable feat, it is also about the tension between the camera and its subject, brought to its most primal fore in the process of capturing documentary authenticity.

The next time you get momentary stage fright in front of people, just think of Alex Honnold ascending the El Capitan.