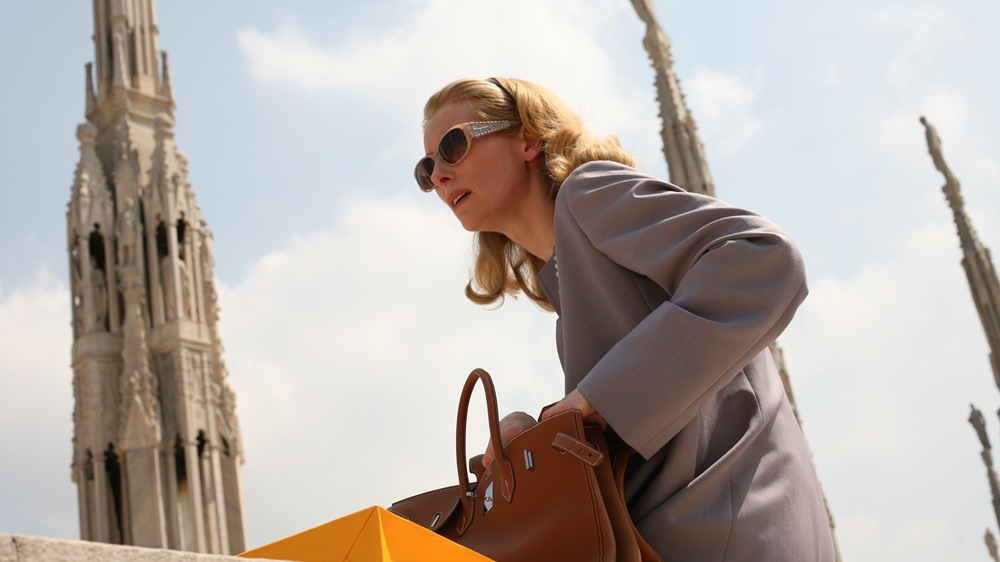 Elegantly-directed with a visual style that is sumptuous, this is a work by a promising filmmaker.

This film musically swells up to a near operatic conclusion and leaves viewers hanging in midair. What leads up to it has the makings of a tragedy. Director Luca Guadagnino explores with elegant direction and poetic cinematography the lives and relationships of characters in an affluent, conservative Italian family. Even though set at the turn of the millennium, I Am Love has a strong anachronistic mood to it, as if viewers are transported to the beginning of the 20th century.

The film centers on one woman who is probably in her early fifties. She is the wife of a husband and mother of a son, both of whom have been appointed successors to a family business – the running of a large textile factory – after the family patriarch retires of old age and sickness. Her name is Emma Recchi, and she is played by the very gifted Scottish actress Tilda Swinton, who speaks remarkably fluent Italian in this film.

In a pivotal dining scene about a quarter into the film, Emma succumbs to the wondrous aroma and taste of prawns prepared by her son’s friend, Antonio, who is a highly-skilled chef. Extreme close-ups of Emma’s moving lips and eyes are intercut with close-ups of the dish, as she delicately slices the prawns to smaller pieces that are then slowly inserted into her mouth. This suggests a sense of eroticism, and as viewers will find out later, Emma’s escalating sexual attraction towards Antonio.

“Happy is a word that makes one sad.”

Emma is a Russian who has assimilated into Italian culture, but she often cuts a lonely figure in the vast mansion that she feels isolated in. She expresses optimism and finds joy in her daughter’s homosexuality, which the latter hides from everyone else. She also finds sexual release in Antonio, whom she has a hush-hush extramarital affair with.

In essence, I Am Love explores the breaking of inhibitions of a psychologically oppressed woman whose actions and behavior lead to the structural disintegration of her family, affecting the lives of individuals who have, in one way or another, looked up to her for emotional support.

Guadagnino’s aforementioned elegant and poetic visual style is quite sumptuous, but may feel detached to some viewers. Despite a strong central performance by Swinton, I Am Love still feels somewhat emotionally lacking. The Emma-Antonio relationship is also left unsolved at the end, which leaves a feeling of incompleteness. Well-executed technically, the film however is not quite as sensitive to the portrayal of emotion as it is to the skillful movement of the camera.