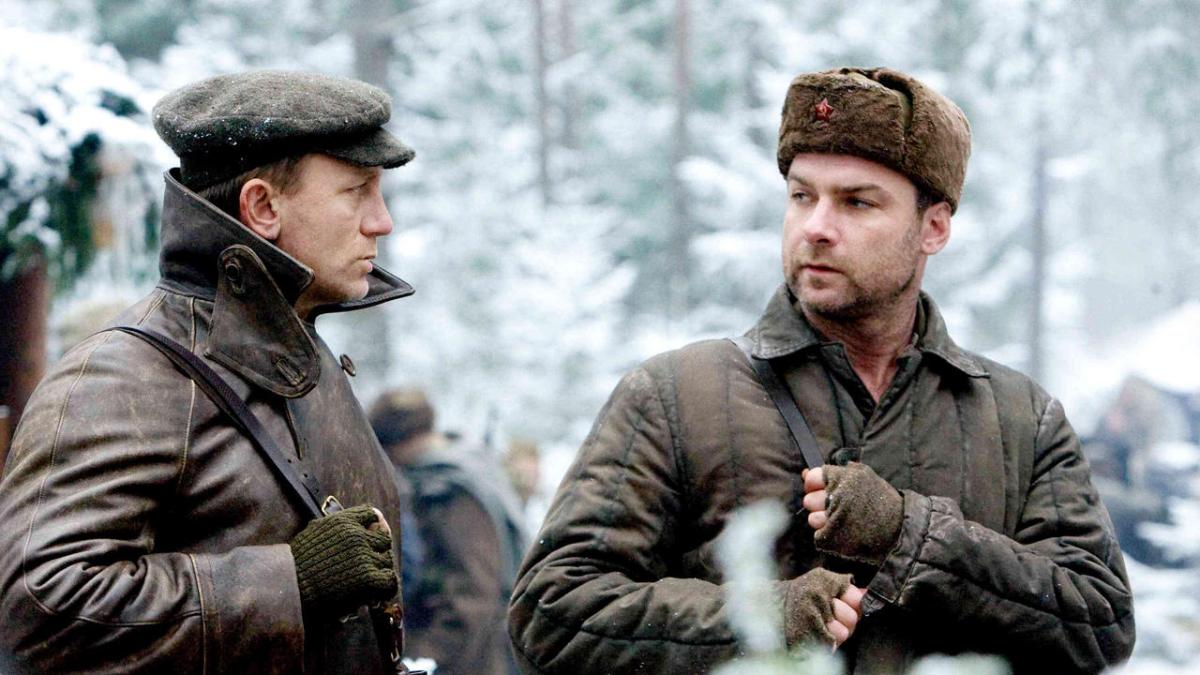 A predictable historical war film about survival and the human spirit that mostly benefits from steady direction by Edward Zwick.

Defiance is based on an extraordinary true story of the Bielski Partisan, a group of WWII Jewish survivors who band together, seeking refuge in the Belarusian forests during the Nazi-occupation of Poland in 1941. They were led by Tuvia Bielski and his brother, Zus.

When their numbers increased, they built a community, a forest village of sorts that remarkably thrived despite the harrowing circumstances. They smuggled essentials like bread and milk, collected wood to build shelter, and stole weapons to defend themselves from the ruthless Nazis. Some died in sacrifice; others survived to carry on their family name.

Defiance is adapted from Nechama Tec’s novel of the same name, and is directed by Edward Zwick, a filmmaker with a reputation for making solid pictures that are usually set in some kind of historio-political context such as Glory (1989), The Last Samurai (2003) and Blood Diamond (2006).

Zwick shifts his focus to WWII for Defiance, doing an effective job in creating a war drama that focuses more on its characters than its battle scenes. We are introduced to Tuvia and Zus early in the film played by Daniel Craig and Liev Schreiber respectively.

Although their performances are decent, Craig is still unable to shake off his Bond persona on screen despite only making two 007 films thus far. Great actors have the ability to dwell deep into their characters such that they exude the proper characterizations that are required of their roles.

For a war film, Defiance is tame when compared to Spielberg’s Saving Private Ryan or Ridley Scott’s Black Hawk Down. Violence is mostly off-the-screen, and gore is almost nonexistent.

“Our revenge is to live.”

Yet the battle sequences pack a strong punch, especially during the air-raid scenes where the environment is suddenly tipped on its scale, from peacefully serene to dangerously hostile in an eye-blink.

Zwick does something cliché during this time: A bomb lands near a lead character, temporary deafening his ear. The sound from the film fades away quickly to be replaced by a high-frequency monotone that simulates the effect of hearing loss.

The character is stunned momentarily as he witnesses the death and destruction around him. He is then shoved by a comrade away from a direct hit from another bomb, and regains his hearing. How many times have we seen this in war films since Saving Private Ryan?

Defiance is nominated for a solitary Oscar for the original score by James Newton Howard which somewhat sounds similar to his Oscar-nominated score for M. Night Shyamalan’s The Village.

Howard’s music neatly complements the visuals which are magnificently cinematographed by the Oscar-nominated Portuguese Eduardo Serra but is still snubbed by the Academy for Defiance.

The scope of Defiance is smaller than expected, and this is what lets it down slightly. The film shows these survivors as they make from one dire circumstance to another while making themselves comfortable at the same time.

In a way it feels predictable and unexciting, and viewers are unable to get the big picture of their achievement during the film. But steady direction by Zwick mostly pulls the film together during its most vulnerable moments.