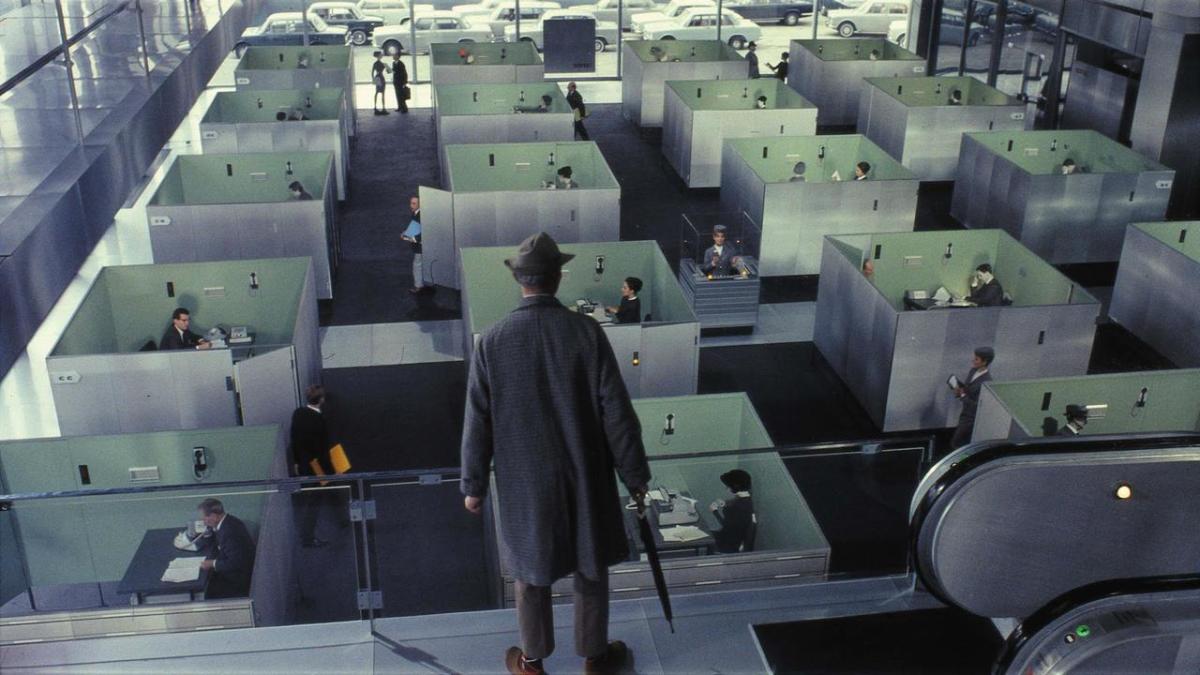 The great Jacques Tati delivers outrageously inventive comedy visual gags in some of the most elaborate mise-en-scene committed to film.

Cast: Jacques Tati, Barbara Dennek, Rita Maiden
Plot: Monsieur Hulot has to contact an American official in Paris, but he gets lost in the maze of modern architecture which is filled with the latest technical gadgets.
Awards: –
Source: Studiocanal

In 2010, French animation director Sylvain Chomet (The Triplets of Belleville, 2003) made the wonderful gem that was The Illusionist, based on an original screenplay by the late Jacques Tati.

It tells the story of a French illusionist who is out of work and travels to Scotland.  There he meets a young woman. It is a bittersweet story with little dialogue, told through imagery rather than exposition, finding humour and the love for living through its charming animation.

Playtime very much echoes the sensibilities of The Illusionist, and despite being a live-action feature, and made almost half a century ago, it shares the same lineage of thought, expression and vision of a singular filmmaker.

Tati’s claim to fame was a series of comedies centering on the fictional character of Monsieur Hulot – Jour de fete (1949), Monsieur Hulot’s Holiday (1953), Mon oncle (1958). He probably reached his creative apex with Playtime, yet it was the very film that bankrupted him.

Still, the comedy of visual gags in the mould of Chaplin, but in a more subtle style, remains one of cinema’s best examples of the use of mise-en-scene.  I have yet to see a film as outrageously inventive and elaborate in its use of mise-en-scene to engage viewers.

“How do you say drugstore in French?”
“Drugstore.”

Playtime has no plot, essentially just Monsieur Hulot operating between a leading and supporting role, and coming face-to-face with a technologically advanced world in modern Paris.

It is a world of architectural mazes.  People are slaves to their machines, to their work, to their workplace, to the design of their workplace.  Everything is the same – chairs, cars, gadgets, office cubicles, apartment rooms.  Heck, even people look the same, tourists especially.

The film is as much a visual articulation of the fear for the end of modernity as it is a cold, soulless view of humanity’s conformance to the kind of world that they are okay to live in.

That in itself is indescribably frightening.  The Criterion Collection puts it succinctly when it calls the film “a lasting record of a modern era tiptoeing on the edge of oblivion”.

In what is one of the most astounding comedy sequences in all of cinema, the 45-minute long restaurant sequence in the second half of Playtime is a testament to Tati’s skill as a director, and how he employs three different musical styles (played by a live band) to give varying rhythms to what is really a visual madhouse of comic gags and errors, where a crisis of faux pas sociality informs us about Man’s penchant for self-destruction, yet Man is arrogant enough to claim progress in the process.