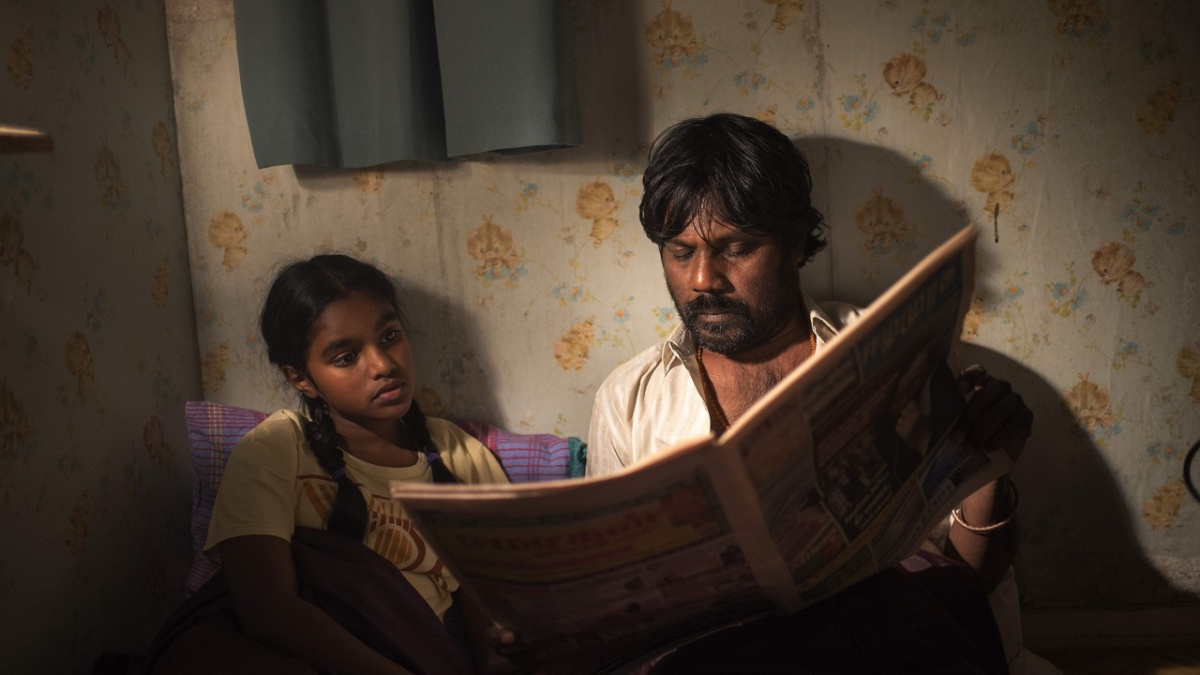 This Cannes Palme d’Or winner is a masterful, humanistic attempt at capturing the issue of immigrants, through the perspective of a ‘family’ of Tamils at a transitory point in their lives.

Cast: Jesuthasan Antonythasan, Kalieaswari Srinivasan, Claudine Vinasithamby
Plot: A Tamil fighter, along with a woman and a child posing as his wife and daughter, flee war-torn Sri Lanka and land in a Paris suburb blighted by drugs. They barely know one another, but try to build a life together.
Awards: Won Palme d’Or (Cannes); Nom. for Best Foreign Language Film (BAFTA)
International Sales: Celluloid Dreams

My students wanted to screen this for Perspectives Film Festival this year, but alas it wasn’t meant to be.  Screened at the Rendezvous with French Cinema instead, Dheepan would have fit right at home at Perspectives, particularly with this year’s theme of Transition.

Directed by Jacques Audiard, one of French cinema’s most celebrated filmmakers working today with such films as The Beat That My Heart Skipped (2005) and A Prophet (2009), Dheepan was picked to win the Cannes Film Festival’s highest honour this year.

While that is (still) debatable, Dheepan had many things going for it.  It is an unconventional  film that straddles between social realism with jarring fantasy.  It is headlined by two incredible unknown Tamil actors Jesuthasan Antonythasan (playing the title character) and Kalieaswari Srinivasan (playing the ‘wife’).

And it deals head-on, albeit in a highly cinematic way, with the issue of immigrants in a foreign (read: western) land.  The last point is especially pertinent in today’s climate of fear, uncertainty and prejudice.

With Audiard’s assured direction and sheer confidence in tackling the material, we get a story about a Tamil Tiger soldier fleeing Sri Lanka in the aftermath of the long-running war.  He is joined by a woman and a girl to form a family unit to seek a better life in France.

Much of the film was shot in a ghetto-like part of the country, populated by characters who play small-time gangsters.  The Tamil family moves into the precinct and tries to find work to make ends meet.

Dheepan plays out intensely through its performances, but also showcases some technical bravura in its climactic set-piece.  By the end of it all, we would experience a thrilling, urgent film that also acts on its humanistic parable to tell us about the plight of immigrants – they don’t start from a clean slate, at least not psychologically.

On a more overarching note, Audiard also assures us, albeit bleakly, that as far as the human existence is concerned, we may fight for different reasons, but ultimately we are fighting for our own dignity in an unforgiving world.  That is the current state of our world, and perhaps that’s why it won the Palme d’Or.