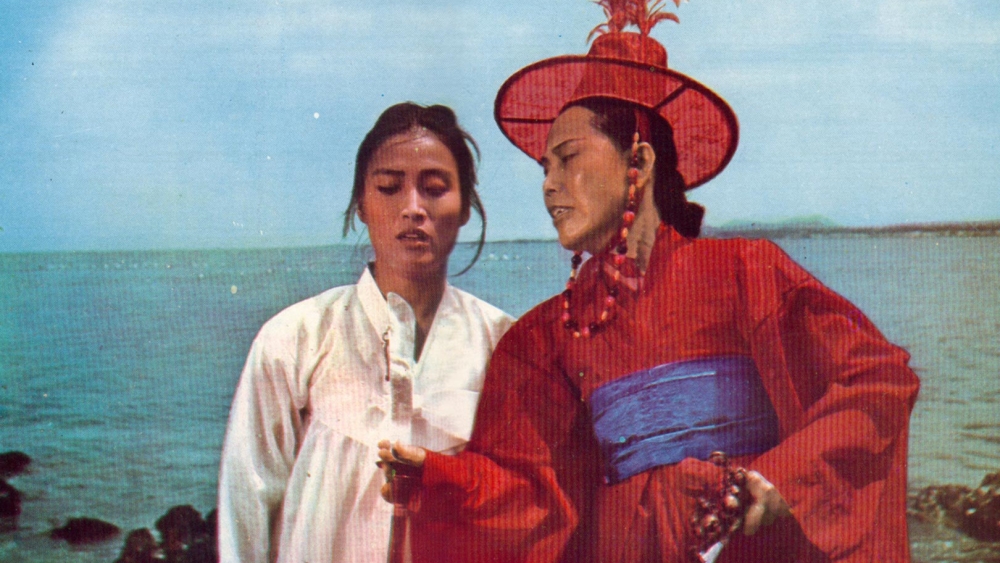 A strange if beautifully-shot work by Kim Ki-young about how myths might operate in the modern world.

Cast: Lee Hwa-shi, Kim Jeong-cheol, Choi Yun-seok
Plot: An investor planning on developing a tourist resort begins an investigation into the legends of the mysterious Io Island in the hope of exploiting its unspoiled beauty.
Awards: –
Source: Korean Film Archive

Although most famous for The Housemaid (1960), one of the seminal works of classic Korean cinema, Kim Ki-young was also responsible for this strange, and at times, bizarre film made in the latter half of his career.

Iodo comes from the tradition of ‘island pictures’, where stories are set on remote locations far away from civilisation. The film thrusts us into a beautiful place with lots of greenery and rocks… where only women reside.

Steeped in mythology where men are cursed to die early by the ‘water ghost’, Kim’s film uses an investigation launched by two men to find a dead person as a plot point that brings them to the island, where they discover the community of women with deeply-rooted traditions and shamanistic beliefs.

Iodo operates like a part-procedural, part horror-thriller, but its narrative can sometimes be quite muddled.  Primarily using flashback techniques (with bubbly water as creative transition), Iodo tries to tell the back story of the dead person so as to inform the present circumstance.

Kim also brings in themes related to Man’s treatment of the environment, particularly commentary about climate change that is eerily prescient in today’s context.

It might be easy to pigeonhole the film as a work about ritualistic beliefs versus modern reasoning, but that may be too simplistic.  Instead, Iodo is better seen as a film about how myths might operate in the modern world—and Kim knows that by imbuing his work with a right tinge of supernaturalism.