(Part 1 of the article is available here)

In this second part of the article, I’ll take a closer examination at some of the new technical specifications of the BenQ W2700, as well as its Stereoscopic 3D viewing.

As mentioned before, the W2700 has a CinematicColor 95% DCI-P3 technology. What is DCI-P3?

DCI-P3 is a common RGB wide colour gamut defined by Digital Cinema Initiatives (DCI) for digital movie projection in professional cinemas. When using the WCG option in HDR mode, W2700’s colour performance is 1.2 times wider than other DLP 4K projectors with Rec.709 color gamut. DCI-P3 faithfully preserves and reproduces the colors and emotions for 4K HDR content that directors envision for their blockbusters. In effect, it gives you a color range closer to what is shown in digital cinema.

I have a small home theatre room and found that the best way to see the WCG option is when the room is in complete darkness. This is when the projector produced the best results.

Watching stereoscopic 3D is possible with the W2700 as backwards compatibility. I’m not sure of current Blu-ray 3D releases as production may have stopped owing to normal UHD sets no longer supporting the format despite movies still being released in cinemas in 3D. However, I was pleased that the W2700, like the W1700, still supports the playback of these 3D Blu-rays. In order to watch them, you still need a pair of 3D glasses.

BenQ uses an active pair of glasses which means you need to charge them fully before viewing (recommended). There were, however, no additional settings in 3D stereoscopic mode other than its automatic default mode. In higher end 3D projectors, I found that there were other settings to control the depth of the 3D. But for the BenQ W2700, it wasn’t the case. I haven’t tried controlling the settings on the Blu-ray player but I’m sure that this might still be possible on the Oppo-203.

UHD as a disc format does not support 3D and it doesn’t look any more likely in the future. Home consumers simply don’t like the inconvenience of wearing a pair of glasses apparently for the length of a movie. This is a shame as the quality of 3D in the cinemas has improved greatly. I recently watched THE LION KING in IMAX 3D and the results were stunning as this was a completely CG-generated film and home cinema screens are large enough to get an immersive experience as well.

I managed to get ROUGE ONE and THE LAST JEDI in 3D Bluray but I wished I could view them in 4K though with added sharpness, contrast and color. I do hope the manufacturers for projectors will continue to offer 3D still as there are a few home cinema owners who did support that format. Maybe there will be a resurgence in the near future with better content out there. 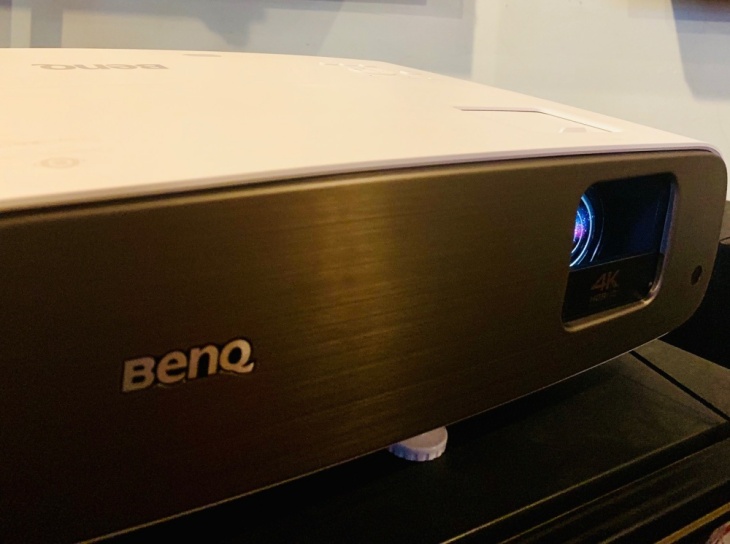 VERDICT – I was impressed by the sleek new look and picture quality of the BenQ W2700 as compared to the BenQ W1700. Both of these models are at entry level prices for a 4K HDR projector and therefore should not be placed on the same pedestal as higher end range 4K HDR projectors by BenQ and other manufacturers. If you’re looking for something that fills the upgrade gap between a full HD projector and a 4K HDR projector, there’s no question that the W2700 is certainly worth your time for exploration. In order to get the maximum out of the projector, a 4K HDR setup with 4K HDR content is necessary. Hopefully it will continue with 4K HDR physical discs as well as they have a higher bit-rate for content playback than streaming.