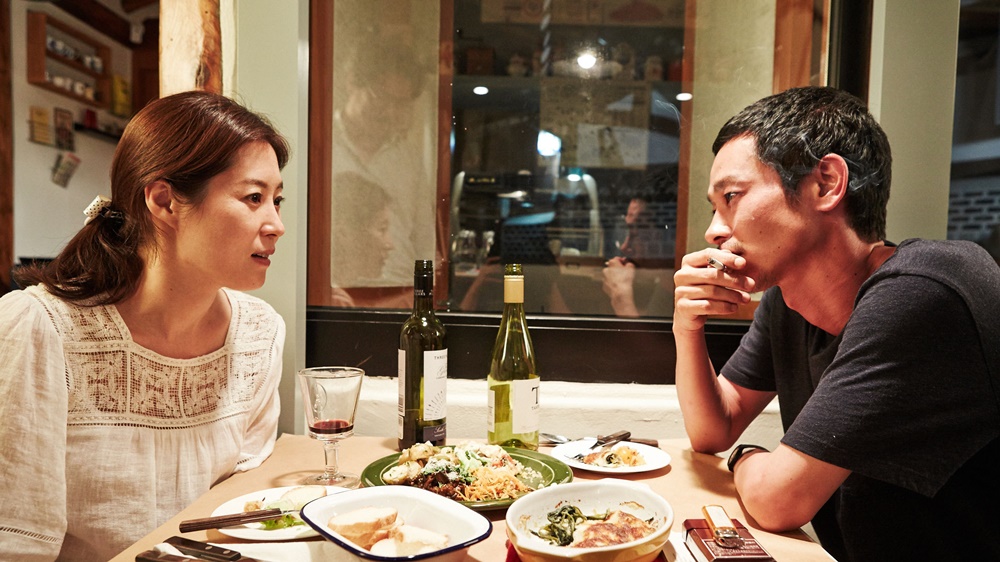 Cast: Ryô Kase, Moon So-ri, Seo Young-hwa
Plot: Kwon returns to Seoul from the mountains and is given a packet of letters from Mori back from Japan to propose to her. Kwon drops and scatters the undated letters. She reads them and has to make sense of the chronology – and so must we?
Awards: Nom. for Venice Horizons Award (Venice)
International Sales: Finecut

My first Hong Sang-soo film is a light-hearted, even breezy drama. Bookended by blue-coloured credits on a bright yellow background, the striking visual palette is a refreshing sight.

It is also accompanied by a cheerful solo piano piece, which is used to punctuate the different dramatic inflections during the course of the short feature.

I say short because it runs a little more than an hour, but feels like a two-hour film not because it is boring, but because it is made with honest depth. You will feel its substance, and I think it is a decent film and a quite accessible entry to the filmography of the director.

The film is titled after a Korean cafe in which two lovers first met a few years ago. One is a Japanese man, Mori (Ryo Kase), and the other is a Korean woman named Kwon (Seo Young-hwa).

The latter comes back from a therapeutic trip to the mountains and gets a bundle of undated letters from Mori. She falls and the letters are scattered everywhere.

Hill of Freedom is told from these scattered letters, its chronology jumbled up. As such, the narrative is a series of random fragments telling of Mori’s visit to Korea to find Kwon.

It also details his encounter with several characters, most prominently the owner of the cafe Youngsun (Moon So-ri), whom he develops a relationship with.

Hong’s film has the premise of a romance drama with a conflicting triangle of lovers, but it is not really the case. It works better as a comedy, drawing humour from the intercultural communication between the Japanese and the Koreans by mode of the accented English language. At one point, there is even a table conversation with a Korean, Japanese and an American.

In this light, Hill of Freedom is really many things at once – a romance, a comedy, a conversation piece – but what ties it all together is Hong’s preoccupation with the nature of time.

Does past, present or future matter? Are consequences and implications more important than causes and instigations? How do we think of motivations when time is of no concern, or of no essence?

Hill of Freedom asks of us these questions, but while we may not have the answers, Hong does well to make us think.